A Message from Captain Johnny

When I was 5, my dad caught his first world record catfish. When I was 9, he broke another world record. I’ve been hunting giant fish ever since. My personal goal is to break the world record giant bluefin which is 1496 pounds. I fished in Hawaii on and off for 23 years and have fished the North Atlantic for the last 11 years.

I believe I hooked and fought the world record 3 times, battling the giant from 8 hours to 12+ hours. I had two giants to the top of the water, but have not landed him yet. So far my largest giant caught is 1286 pounds.

ALL ON THE LINE (available on the Discovery Channel, see links below) provides a stage for the Smith family and me to pursue the dream of landing the world record. Over the years I’ve fished with seasoned veterans that have the same disease I have. Hunting giants is my true passion and it is a blessing to share with other anglers from the most experienced angler to the first-time hunters. I’m often asked questions of how, when, where, and why – so we thought we would share this knowledge and experience with those who are interested! ALL ON THE LINE is a true blessing for Gloucester and the bluefin as well as our fishing community – THE truth about hunting giant bluefin tuna. Keep the questions coming. Email your questions to jjohnsoneagle@yahoo.com and we will do our very best to share our knowledge and experience. Tight Lines, Captain Johnny

Q: Captain Johnny, I heard you say on one of the episodes of ALL ON THE LINE that Gloucester was the giant bluefin tuna capital of the world. Can you explain why that is the case?

Q: I watched all four ALL ON THE LINE episodes and was blown away by the authenticity of the characters. What a great show. One of the things that impressed me the most was the truth in the pricing of giant bluefin tuna. You hear of bluefin going for tens of thousands of dollars for one bluefin tuna and then I see on the tv show that you only got $5-$7/lb. Why is that?
A: The bluefin tuna caught off the shores of Massachusetts and New England are truly the highest quality tuna in the world. The marketplace, primarily in Japan, will pay huge money for fresh bluefin tuna. The price per pound paid at the dock to the boat can skyrocket depending on supply and demand. And of course, quality. It’s rare, but I’ve seen bluefin tuna that sold for more than $40/lb. But once the fleet starts catching a high volume of fish the price of high-quality fish goes down to approximately $5-$7/ lb.

Q: Captain Johnny, I saw on the show All On The Line that you only use Penn gear. Could you give me your reasons and thoughts behind that?

A: I have used Penn gear for the past 34 seasons. Although I have tried almost every other brand I have never found any other equipment that performed like the Penn International. It’s durability is second-to-none. Penn equipment is made extremely well and it’s easy to get replaceable parts when needed. Penn equipment has never let me downed they stand behind their gear 100%. The drag (torque) system is just what I’m looking for on my hook sets. Fishermen know that if you don’t hook a giant bluefin tuna properly the chances of landing the fish get pretty slim. When you fish for a living, 140+ trips a year, you have to be able to depend on your equipment. Penn’s performance has been top-notch for me over the years. I depend on my gear for the livelihood of my family, so that choice is made with great care and consequence. A lot is riding on my ability to land a fish.

A: Anyone who talks negatively about the Coast Guard does not fish for a living. The Coast Guard is, without question, our very best friend and any commercial captain will tell you that they have nothing but respect for the Coast Guard. You have to understand that we live on the water and that they literally risk their lives to protect ours. Nothing but love and respect, prayers and blessing to the Coast Guard.

Q: As a commercial captain what is your range for pursuing the giant bluefin?

A: The FV Subdivider has fished from the Canadian line all the way down to Jones Beach, Long Island, NY. We do what we have to do to put the fish on the boat. You cannot make a paycheck without bringing home giants! 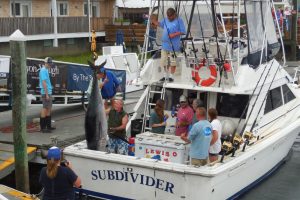 Q: We heard that ALL ON THE LINE is now streaming on Discovery+. Is that true?
A: It sure is! It started streaming on the new Discovery+ January 4th, 2021. You can start a 7-day free trial today. It’s now easier than ever to watch ALL ON THE LINE and other Discovery Channel shows from your smartphone or tablet. After you do we’d love to get your comments on our Facebook page (https://www.facebook.com/allonthelinetv). We’re hoping for a prime-time slot next season and your comments on our Facebook page will help us get that on the Discovery Channel. Thank you so much!!
Here’s the link to the free 7-day trial. https://www.discoveryplus.com/
Watch full episodes of ALL ON THE LINE at the Discovery Channel on-line or on TV. https://go.discovery.com/tv-shows/all-on-the-line/

Ready to book a Giant Bluefin Tuna hunt with the Gloucester Charter Connection? 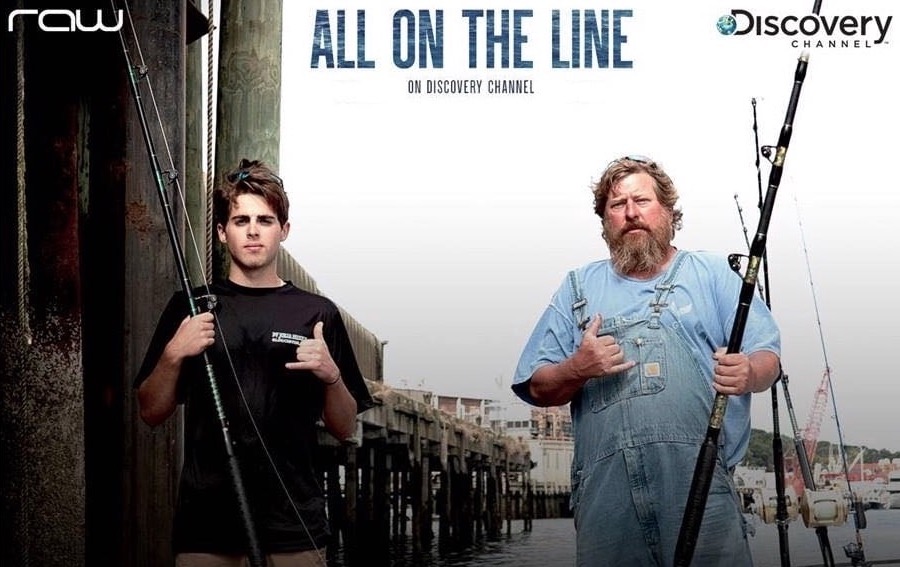